This article looks at recent studies that show that shared parenting is easiest on children. 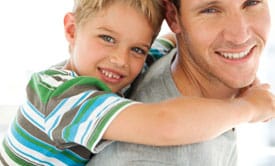 In Texas, family courts will often strive to ensure that each parent plays a meaningful role in their children's lives following a divorce. That's why joint custody has become the norm in Texas in recent years whereas sole custody tends to only be granted in situations where one parent has a history of inflicting emotional or physical abuse, is incarcerated, or has an ongoing substance abuse problem. Now, a growing number of studies are providing scientific backing for ensuring that parenting is shared following a divorce. Those studies show that shared parenting arrangements tend to be far less stressful on children than living with just one parent.

The argument for shared parenting

As the Minneapolis Star Tribune reports, one researcher at Wake Forest University analyzed 44 previously published studies on how divorce conflict impacts child behavior. The study is important since many arguments against shared parenting rest on the assumption that conflict between parents after a divorce is harmful to children's behavioral development.

The Wake Forest study, however, found that conflict between parents actually has a very limited effect on child development. Instead, the study found that what trumped all other factors was ensuring that the child had a positive relationship with both parents. Being exposed to conflict between parents and having to deal with being shuttled between two households had a comparatively limited effect on children's outcomes and wellbeing.

That study is not the only one in recent years that supports the view that ensuring both parents maintain an active presence in their children's lives is best for those children. As Time reports, another recent study analyzed national data from 150,000 12- and 15-year-old students and found that while children who were in nuclear families had the fewest psychosomatic health problems, those who spent time living with both parents still scored better than those who lived with just one parent.

Of course, it is necessary to point out that while shared parenting may be the best child custody arrangement for most children, it is by no means the best for all children. Each family is unique and there may be problems specific to one parent that could indeed harm a child's physical, emotional, or psychological wellbeing. In some situations, having one parent gain sole or primary custody is indeed in the best interests of the child.

Child custody issues tend be some of the most emotional issues to arise in many divorce cases. While courts strive to put the best interests of the child first, at the end of the day it may be difficult for a judge to have a firm grasp of a family's individual circumstances and to truly understand what parenting arrangement would indeed be best for the child. That's why parents going through a divorce should talk to a family law attorney. An experienced attorney can advocate for the parent's interests and help ensure that he or she remains an active presence in his or her child's life.